Recently, I witnessed the hidden power of a single word. Uttered by a seasoned physician who meant only well, the word distressed a room full of people without the physician ever realizing the effect of his word choice. The word he casually employed was “agonal.” The hidden power of a single word to mean completely different things to different people was never so clearly apparent.

Some background is in order here.

The physician is a well-respected oncologist, who I know to be a genuinely compassionate and spiritual person who has dedicated his life to caring for people with cancer. The occasion was the last hour of life for a family member (whom I’ll call Sam) dying of an aggressive form of cancer while still in the prime of life. All the options had been explored, and home hospice care had been the order of the day for the last few months. The doctor helped to control Sam’s pain, and only when it was clear one morning that Sam was unresponsive and near the end was the decision made to move him to a hospital room.

The word went out.

The family came to the hospital to pray and support each other and say goodbye to Sam. Sam was no longer outwardly responsive to what was taking place. There was a sense that a cancer-riddled shell of the man was still present, but that the spirit had largely departed. We felt he was not suffering at this point, which was a source of great comfort to those around him.

As the end drew near, Sam’s breathing became shallow and cyclical, with lengthening pauses in between groups of breaths. This is a predictable pattern well known to those who care for the dying, and medicine has given it different names. Sometimes it’s referred to as “agonal” breathing. It doesn’t imply that suffering or even consciousness is present in one who breathes in this fashion before passing on.

Perhaps you can imagine what happened next.

Sam’s physician came into the hospital room, knowing he was unconscious, well-medicated, and very near the end. He knew that the correct orders had all been given and that there was nothing more to do than wait. He saw the breathing pattern, recognized it, and confirmed for them that Sam was now “agonal” before turning and leaving the room to see his next patient.

The doctor meant to communicate that “Sam is unconscious, not suffering, and the end is very near, as indicated by this breathing pattern. There is nothing more that needs to be done.”

The family heard this: “He’s in agony.”

The doctor had no clue about the miscommunication from the anxious facial expressions and body language of those present (not to mention their questions) because he was so quickly gone. The family was not only deeply distressed to think that Sam’s last moments were to be spent in agony, but absolutely appalled that the doctor could be so callous as to let him suffer through his last moments unaided. It didn’t help the doctor’s cause that he had to ask Sam’s wife if she was Sam’s wife for about the third time in their working relationship. In partial defense, I was often the one who brought Sam to his office for exams—but the doctor really shot himself in the foot with that line, and more than once.

Fortunately, things were straightened out with an explanation of the medical meaning of “agonal.” Sam’s wife and family were reassured that he was not in agony, although the energy in the room was never the same again. Sam passed away quietly with one final breath shortly thereafter, and as far as we could tell, it was a peaceful transition.

The hidden power of a single word can be very important.

When you pick up a tool, you pay attention to what you do with it, or you may lose a finger or worse. Pay attention to your words—use them to accomplish a goal, to achieve an effect, to heal an injury. Words are symbols for ideas—pick them with deliberation and with an awareness of what you are trying to accomplish. Silence is like an amplifier for your words—use it judiciously to bracket your words and give them more power. Look for the effects of your words in the responses of those you speak with. Did the other hear you correctly, or at all? Did your words accomplish the work you intended? If not, stop and reevaluate, and try again if appropriate.

Finally, use words to let others know you’re listening. Reflect what they say to you with enough variation to avoid mimicry but enough accuracy so that the speaker knows you understand. The power of letting someone else know you’re genuinely listening is astonishing!

It can help you minimize the chance of being misunderstood by one simple word. Never underestimate the hidden power of a single word. 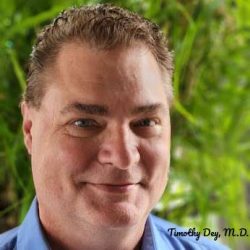 Timothy Dey
Timothy Dey, M.D. is an expert with over twenty years experience helping professionals think through challenging problems clearly. Dr. Dey makes a unique combination of educational assets and life experiences available to his clients. He uses advanced listening, coaching, and teaching tools to provide Skillful Thought Support Services – a personalized best way for anybody to move from where they are to where they desire to be.

Timothy Dey, M.D. is an expert with over twenty years experience helping professionals think through challenging problems clearly. Dr. Dey makes a unique combination of educational assets and life experiences available to his clients. He uses advanced listening, coaching, and teaching tools to provide Skillful Thought Support Services – a personalized best way for anybody to move from where they are to where they desire to be.